Do Lizards Carry Their Babies In Their Mouth?

Do Lizards carry their babies in their mouth?

Lizards do carry their babies in their mouths, as other animals, such as cats do. This is because their legs are not capable of this, and they do not have hands, like us humans. They will carry their babies for several reasons such as avoiding predators.

So, now you know. But, are lizards cannibals? Do baby lizards stay with their mothers? Do some lizards eat their babies? Keep reading for these answers, and much more…

3 Reasons why a lizard will carry their babies in their mouth: A baby lizard hatching from its egg.

Earlier I mentioned one reason why a lizard may carry their babies in their mouth. In this section, I will provide a couple more reasons and more detail about each one:

01. They Have no other option

This may seem obvious, but it is worth stating that lizards have no other means of carrying their young than their mouth. Unlike kangaroos, they have no handy pouch that theirs can rest in. Also, they can’t use their legs, and have no hands, like us humans.

So, when, or if, you see a lizard carrying their babies in their mouth you know that it may just be a harmless method to move them around because they have no other option to transport them.

A mother lizard who cares for her babies after they are born, or hatched, has only one objective, keeping them safe. Therefore, if they fear that there is an imminent threat they will want to move their babies right away. hence the need to carry them in their mouth.

Lizards have many predators such as birds, other bigger lizards, other animals, etc. Therefore, they have to look out for many potential threats to their young.

03. Change in their environment (in a bad way)

Changes in an environment can force a lizard to move and carry its babies with them in its mouth. Lizards in the wild have an environment that changes by the minute and catastrophic changes can happen such as torrential rain destroying their cover, etc.

Do lizards eat their babies?

Lizards are not known to eat their own babies intentionally. However, many lizards do not provide aftercare for their babies, leaving them to fend for themselves. So, there is a chance they could eat them accidentally if their paths meet after leaving.

Lizards will eat other lizards babies without hesitation. This may sound outrageous to us humans. But, for lizards this a practical choice for a couple of reasons. Firstly,  they may be hungry and it’s just another food option.

And, they also want to eliminate their competition by any means necessary. This is just another way for them to do it.

Lizards do cannibalize. In fact, most will not hesitate to attack and eat adults or babies of their own species. The exception may be those lizards that are classed as herbivores. But, they will still defend themselves with violence. The Aegean Wall lizard is an example of a lizard that will cannibalize without hesitation.

The Aegean Wall lizard, also known as Erhard’s wall lizard (Podarcis erhardii), according to Wikipedia, is found in South East Asia. And, is just one example of species that are known for cannibalism.

Do baby lizards stay with their mom?

Some baby lizards do stay with their mom, such as the Baby prehensile-tailed skinks. But, many others are left to fend for themselves after birth, or hatching. Lizard babies are different from us humans. Meaning, they don’t rely on milk from their mother.

This means that they can eat a similar diet to their mom from birth and effectively hunt for insects, or find plant-based food right from the beginning. This gives them the ability to provide for themselves.

However, they are still vulnerable to being eaten by other lizards, or predators. So, without their mom, they have a low chance of survival. The theory is, this is why there are multiple babies born at once to provide a higher probability of the species surviving. 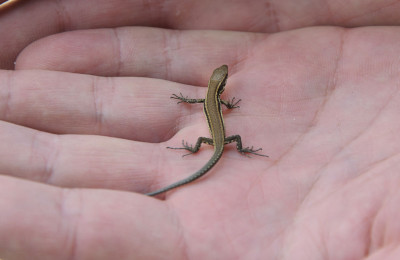 A baby lizard (Lacerta agilis) on a hand.

Some baby lizards are dangerous, such as the Gila Monster found in the US and Mexico. However, many house lizards are not dangerous. However, they will still bite, and this may hurt you. It just means these lizard bites are not known to be fatal.

Because some lizards are dangerous, and some people are unsure which species a lizard is from a glance, it’s best to be cautious to keep yourself safe. And, seek professional, or medical advice if you have been bitten to make sure.

How long do baby lizards stay with their mother?

This Prehensile-Tailed Skink, also known as the Solomon Islands skink, according to Wikipedia, is a large skink and known to be a herbivore.

How do you tell if a lizard is a boy or girl?

Working out if a lizard is a boy or girl varies from species to species. For example, the Western Fence Lizard is more colorful than its female counterpart. Such as its blue-colored underside.

Like other animals in nature, it can be difficult to tell them apart. But, the male, in many cases, has distinct color differences. The theory is, this may be done to make them stick out for mating purposes.

With regards to the Western Fence Lizard, I mentioned earlier, which is also known as the blue-belly lizard and found in various US states such as Washington and California, the male is obvious for these coloration differnces.

Do some lizard mothers die before their eggs hatch?

Some baby lizards are left alone because their mother dies before they hatch, such as the Stump-Tailed Chameleons. Once they are introduced to the world their mother is long gone and they are left to fend for themselves.

These Stump-Tailed Chameleons, also known as pygmy chameleons, are an interesting example. But, many other lizard babies are left to fend for themselves for other reasons.

How do baby lizards protect themselves without their mother?

If a baby lizard (click here to see if they will attack) is left to look after itself, one of the techniques it uses for survival is burying itself underground. This keeps them off the radar of known predators such as birds, or other bigger lizards.

Obviously, it’s not a guaranteed route to survival, but one of many techniques used to increase their chances of survival.