If you have seen a dewlap on a lizard before, and are interested in them, you may wonder if it’s just reserved for male lizards, or if females can have them too…

Yes, they do, but they are much smaller and often the same color as the female’s skin and scales. With males, the dewlap will be larger, more pronounced, and often colored as well. Further, the male will be able to move those colorful dewlaps using the ‘hyoid apparatus’, a collection of bones that have evolved for this purpose.

What is the purpose of a dewlap on a lizard? 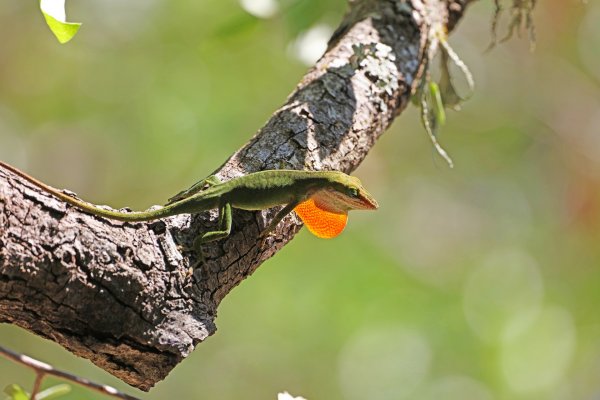 A green male anole on a tree branch displaying its orange dewlap.

Dewlaps serve two main purposes for male lizards. First off, as it’s up to the male to properly court and woo his potential mate, those dewlaps serve to gain the female’s attention and announce his intent to breed with her.

Secondly, male lizards also display their dewlaps as a way to show other lizards that they have entered their domain, delivering a colorful warning to the other lizards about who is in charge.

With females, the less pronounced dewlaps function is not fully understood, but we believe that they help to improve visibility where other lizards are concerned so that they may interact while remaining effectively concealed from other animals.

Why are dewlaps important?

While we don’t fully understand the complete and entire range of functions that dewlaps provide, we do know that they are very important in mating rituals and in establishing dominance among other lizards in their effect territories.

Male dewlaps tend to be colored, which helps to reinforce that this is an evolutionary trait that Nature has carefully cultivated in these reptiles, but we still need more conclusive research data before our understanding of dewlaps and the range of their function will become complete.

Why is it called a dewlap?

Originally used to describe the flap of skin that hangs at the throat of cows and oxen, the origins of the word are a little hazy. It was, however, a favorite word of William Shakespeare, who describes a woman in Midsummer Night’s Dream whose dewlap was capacious enough to hold Ale for pouring into a cup!

Despite such famous historical use of the word, the etymology is still a bit questionable. Another theory about it says that an animal searching out food in the morning might collect dew on this bit of skin. While this sounds quite viable, historians believe that the answer might be quite a bit simpler than this.

They believe that the ‘dew’ in ‘dewlap’ is not meant to be ‘dew’ at all, but was originally another word that we have lost somewhere from our vocabulary with the natural passage of time!

Why do female anoles have dewlaps?

While it is not used as the male dewlaps for display in a mating ritual, it is believed that the female Anole’s dewlaps are simply there to help the lizards to stand out when they are camouflaged by their other surroundings.

As the shape of the dewlaps would be something easily spotted by the Anoles themselves, but not their predators, then this would allow the lizards to interact and to find each other with relative safety.

That said, we still don’t fully understand their function, so this information should be considered incomplete until further research and conclusive data can fill in the gaps in what we know.

Do all brown anoles have a dewlap? Female brown Anoles have very small dewlaps and if they do not choose to display them, then you might not think that they are there at all. Due to their minuscule size, they are quite easy to conceal, but if you see tony white or gray colorations at the throat of your female then congratulations – you’ve just spotted the dewlaps!

Do female lizards puff their throats?

No, female lizards do not puff their throats – only the males do. Lizards such as Anoles use their colorful and large dewlaps to establish their dominance in their territory, puffing up to show the other lizards that they are fierce and not to be trifled with!

Beyond this, throat puffing is also a show for the ladies, meant to tell them that the male is both powerful and interested in breeding with the female or females in question.

Do geckos have dewlaps?

Yes, Geckos do have dewlaps, which provide quite a lot of useful functions. For instance, puffing up allows them to taste the air and locate potential prey much more easily. When it’s time to molt, a Gecko will also begin puffing their dewlap so that it aids in shedding its old skin.

Geckos also use their dewlaps for another very interesting trait. While some lizards can vocalize to some extent, it is limited mostly to minute chirps or guttural groaning that can be a little difficult to hear if you aren’t listening intently.

Geckos, however, can sing! While we don’t know how many ‘songs’ these lovely lizards know, we do know that they have one for warning other Geckos of danger in the area and another that’s intended to sweep the lady Geckos off their feet!

What is the pink thing under a lizard’s neck?

If you see a lovely light-green, a white-bellied lizard with what appears to be a ‘pink, white-speckled fan’ underneath their throat, then you are looking at a male Green Anole, and that ‘thing’ is called a ‘dewlap’.

These colorful additions to the lizard’s throat serve several purposes, most prominently in attracting mates and in telling other male Anoles that they’d best go somewhere else ‘if they know what’s good for them!’.

While you might see one on a female as well, there will be a huge disparity in the size, so that the female’s dewlap is typically small enough to escape notice if the female chooses not to display it.

What is the orange thing on a lizard’s neck?

Dewlaps don’t just come in pink, as their coloration will ultimately depend on both the environment and the species of lizard involved. For instance, take the Gecko. These lizards often have bright yellow, orange, or even a brick-red coloration to their dewlaps.

So, if you see orange dewlaps on your lizard, don’t worry. That’s just a variation on a theme that Nature put in place on the lizard and it’s supposed to be there!